The company was founded in 1926 by the engineer Antonio Cavalieri Ducati (Comacchio, 2 April 1853 - 27 June 1927) with the name of "Società Scientifica Radio Brevetti Ducati", specialized in research and manufacturing of technologies for radio communications. The aim was to exploit industrially the patents of his son Adriano, a pioneer of radio broadcasts. He, although very young, had made the first stable connection between Italy and the United States and the first simultaneous connection between the five continents. Soon, thanks to the sons of Antonio Ducati (who died only a year after the foundation), the company began to establish itself, and then spread to various industrial fields. His sons Adriano, Bruno and Marcello Cavalieri Ducati started their business with the manufacturing of a capacitor called "Manens", in the basement of a building located in the center of Bologna, in Via Collegio di Spagna. Between 1930 and 1934 the production was expanded and moved to the villa owned by the Ducati family, in Via Guidotti. 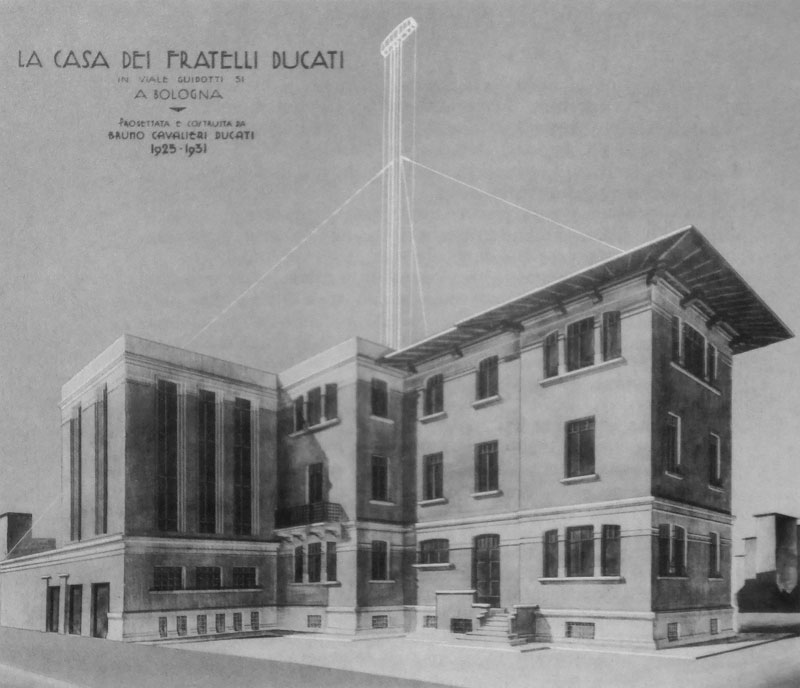 In that same year, on the occasion of the 1st Congress of Italian Radiotechnics, Gugliemo Marconi wanted to visit the Ducati Company. It was received by the three brothers who, excited, accompanied him in the visit that was meticulous and obviously interesting for the guest, who wanted to visit the whole factory. 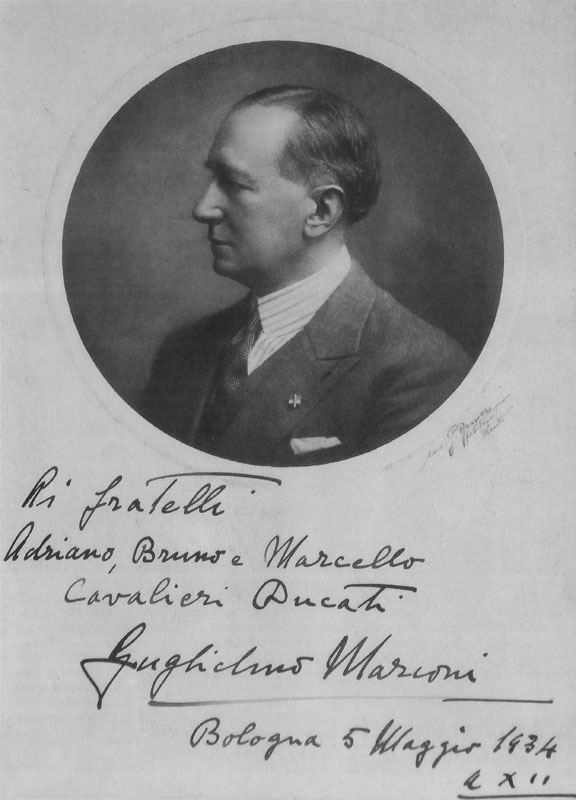 In 1935 the factory where the Ducati Motor Holding Spa and the Ducati Energia Spa are currently based were built. 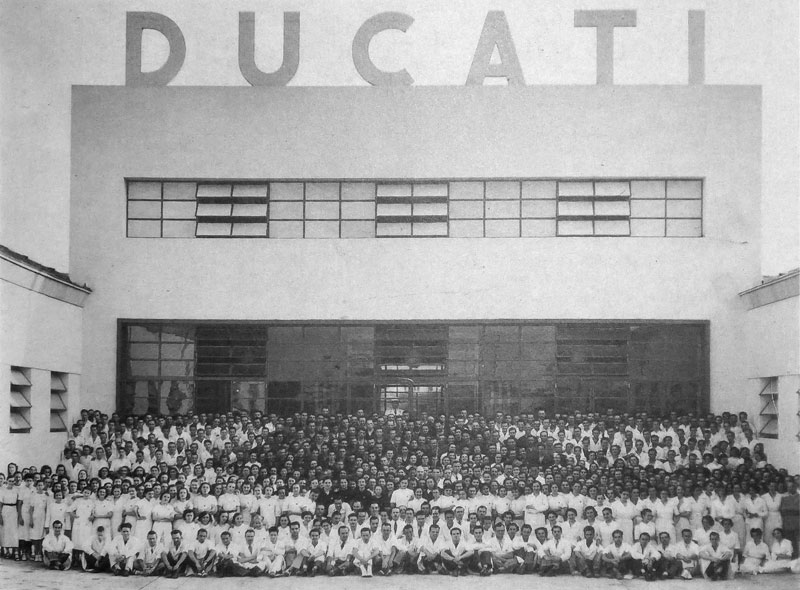 The manufacturing was expanded with the creation of the first radio equipment, radio antennas, the first intercom communication systems (called "Dufono"), film projectors , basic mechanical calculators ("Duconta") and electric razors ("Raselet"). At the Borgo Panigale factory, towards the end of the 1930s, were added two further factories located in the suburbs of Bologna, Bazzano and Crespellano. 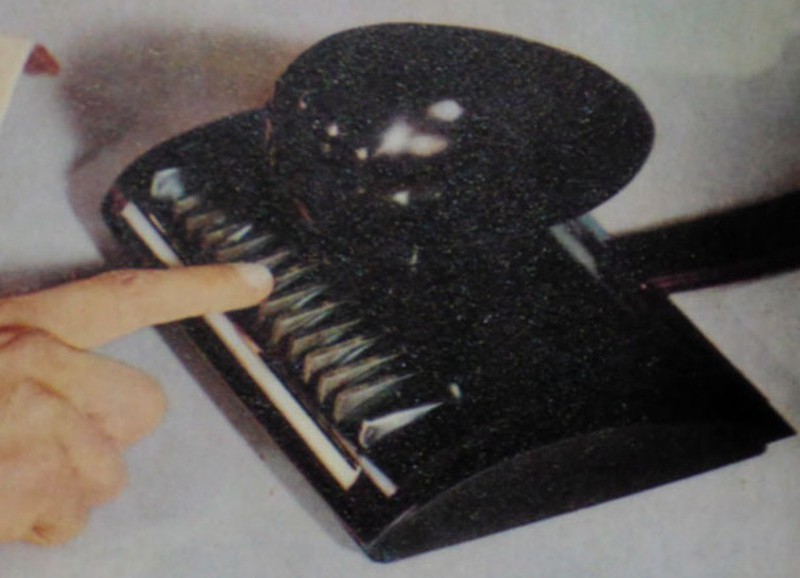 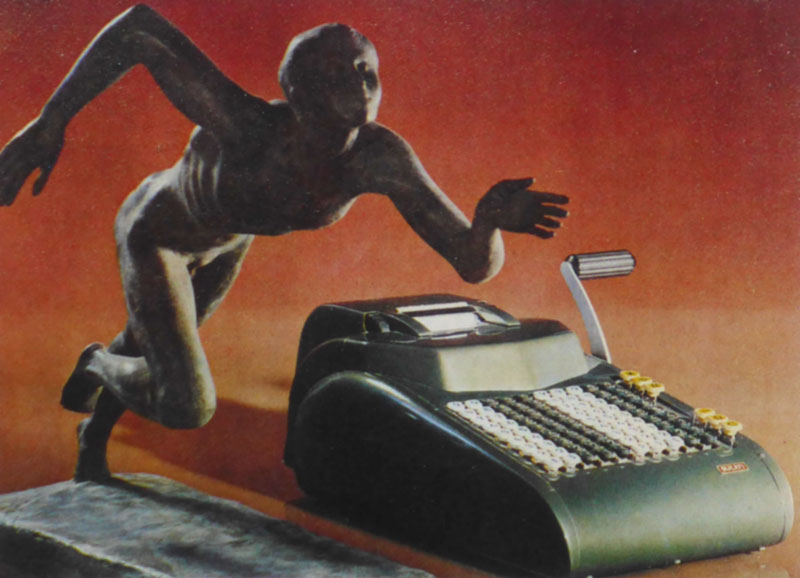 In 1939 the optical section was created with the important collaboration of the Istituto Ottico of Florence, directed in those years by the professor Vasco Ronchi, being able to count on excellent technicians coming from the Salmoiraghi and from San Giorgio as the engineer Bruscaglioni.

During the Second World War, Ducati was forced, like many other Italian companies, to convert the sophisticated production from civil use to military use. Following the armistice of 8 September 1943, the factory was occupied by German troops; subsequently it was bombed and destroyed on October 12, 1944.

At the end of the war, arose the need to create a new production to complement the previous achievements: so, at the request of IRI (Istituto per la Ricostruzione Industriale, "Institute for Industrial Reconstruction" in English), in 1946 was born the motorcycle department, as a branch of the company, in order to manufcature on license the Cucciolo, a single cylinder engine of 48 cc with two-speed gearbox to be applied as an auxiliary engine to a normal bicycle.

The optical section in 1946 created the "Dream", first of a series of microcameras, changing during the years in different versions and models that however proved unsuccessful due to the lack of availability of film rolls and the high selling price. For these reasons in 1952 manufacturing was stopped and in 1953 the optical section was closed during a corporate restructuring.

In 1960 the Breda, on which the Ducati depends after the dissolution of the liquidation of the FIM (Fund for the financing of the mechanical industry), decides to sell the Ducati Elettrotecnica at French group CSF (Compagnie Sans Fils) of Paris. The general management was entrusted to Eng. Antonio Guglielmi, and under his direction Ducati Elettrotecnica assumed more and more importance both for new products and for scientific , technical and commercial improvements. The sector of capacitors, alternators and radio transmitters was developed. It was the '60s, the best of the post-war period, and a total of 3,000 employees were reached at the end of the decade. 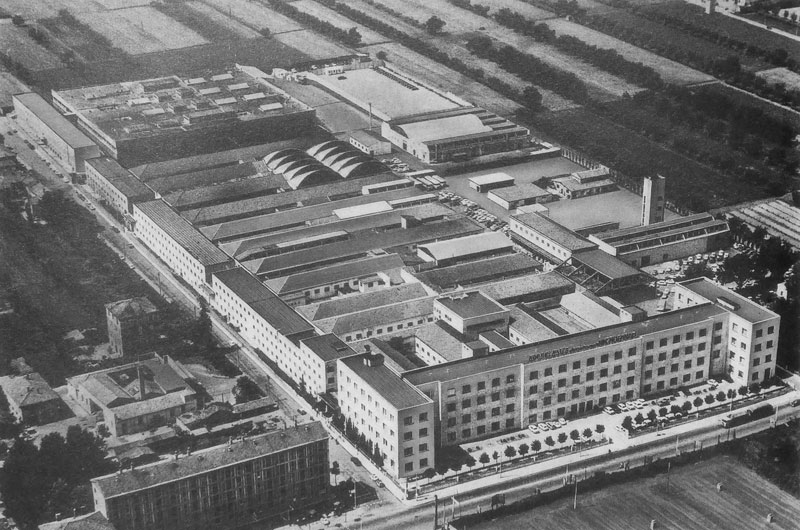 Since 1970 the great and promising development of the Ducati Elettrotecnica was unfortunately interrupted by the spread of workers protest and the country was shaken by dangerous disturbances, particularly violent towards the most important industry in the region. In 1975 the CsF-Thomson group decided to leave Italy and put the Ducati Elettrotecnica into liquidation. The Italian government entrusts Zanussi of Pordenone with the purchase of the Ducati Elettrotecnica, especially since in the meantime Zanussi has built a factory for the manufacturing of alternators and magnets for motorbikes in Borgo Panigale, alongside the Ducati plant.

At the beginning of the 80s Zanussi entered into a crisis and was taken over by the Swedish company Elettrolux, which however did not want to take over the Ducati Elettrotecnica because it was not part of its industrial and commercial business. So it was decided to divide the Ducati complex into two branches, distinguishing the radio systems from the capcitors and the alternators. In 1984, in Pordenone, two new companies were born: Ducati Energia Spa and Ducati Radiotelecomunicazioni SpA.

Ducati Radiotelecomunicazioni Spa, established for continuing the activities of the Radio Section of Ducati Elettrotecnica, owes its establishment to the company Novel, specialized in the same application field. At first it was based in Borgo Panigale, in the same building as the first Ducati company, but then prevailed the idea of bringing it closer to Novel, which has its plant and headquarters in Pero, near Milano. 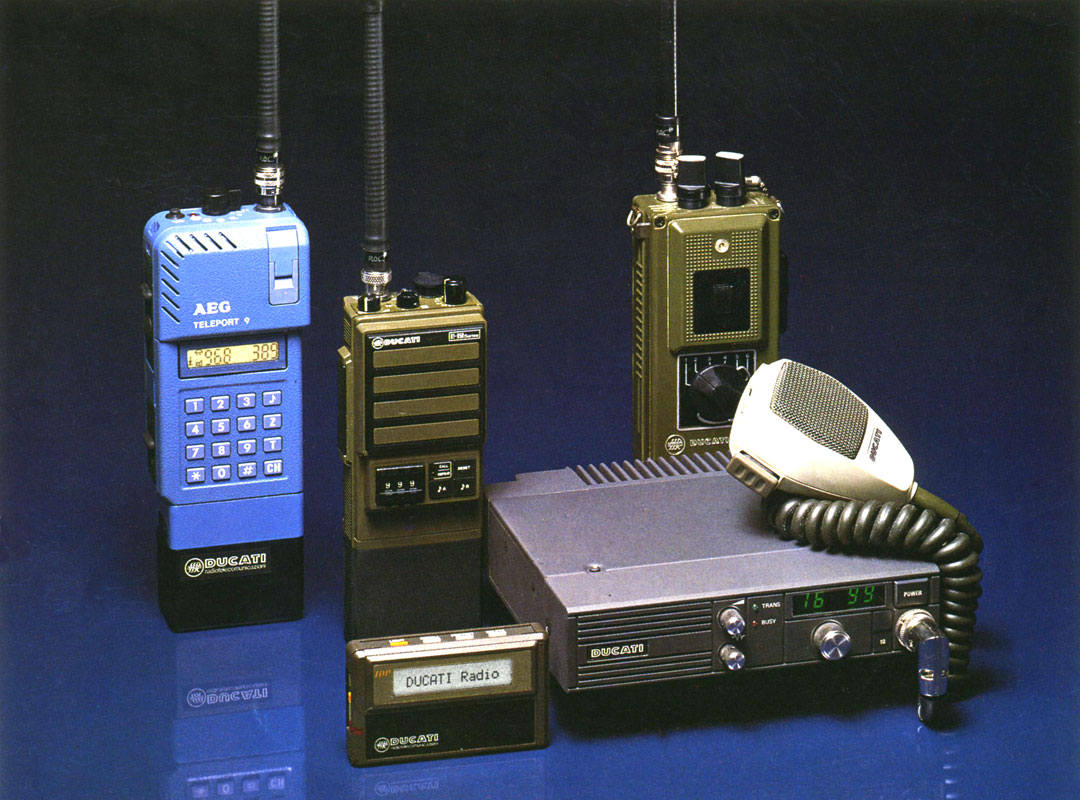 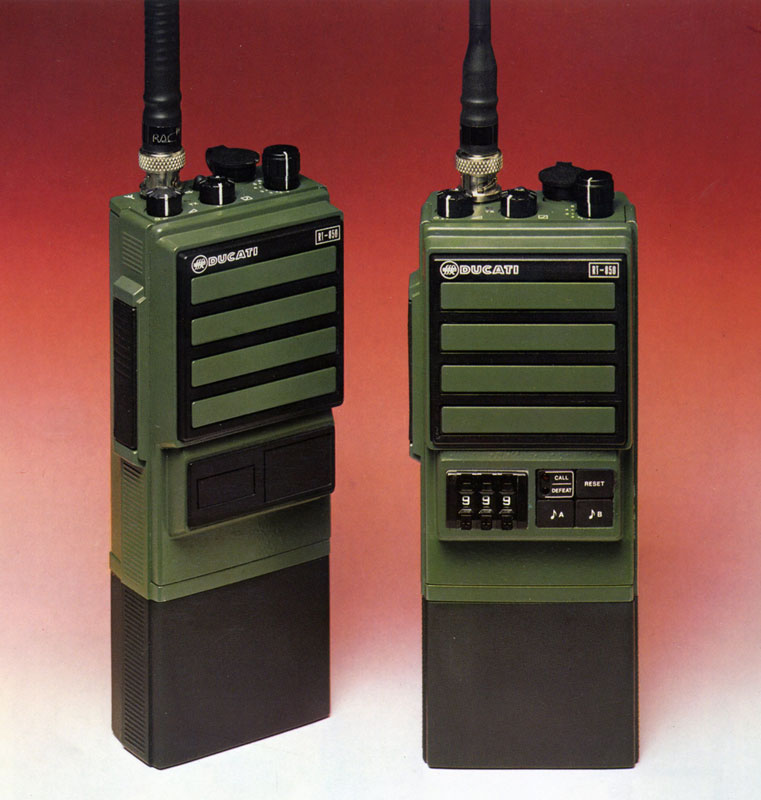 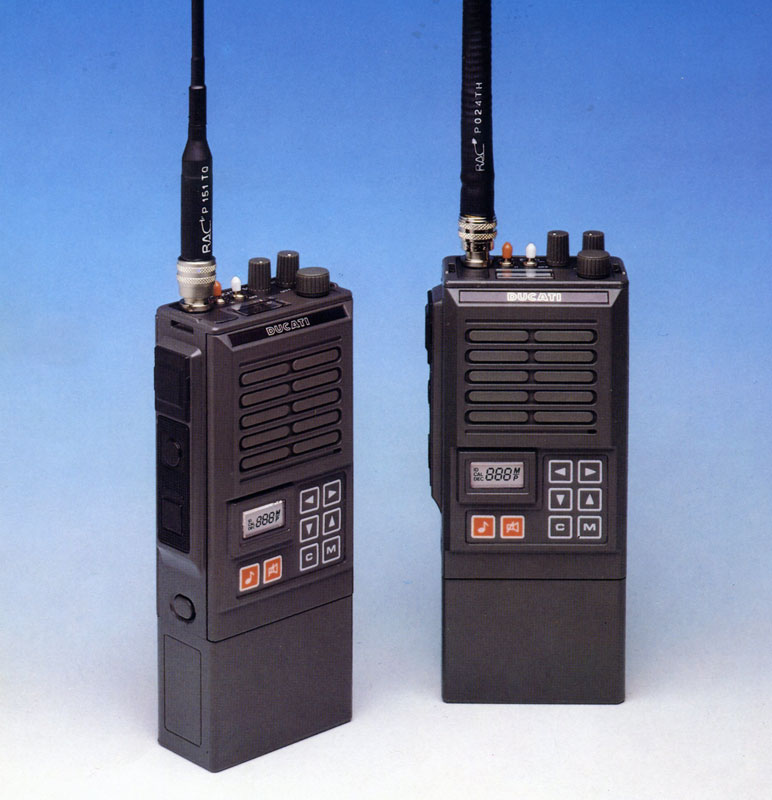 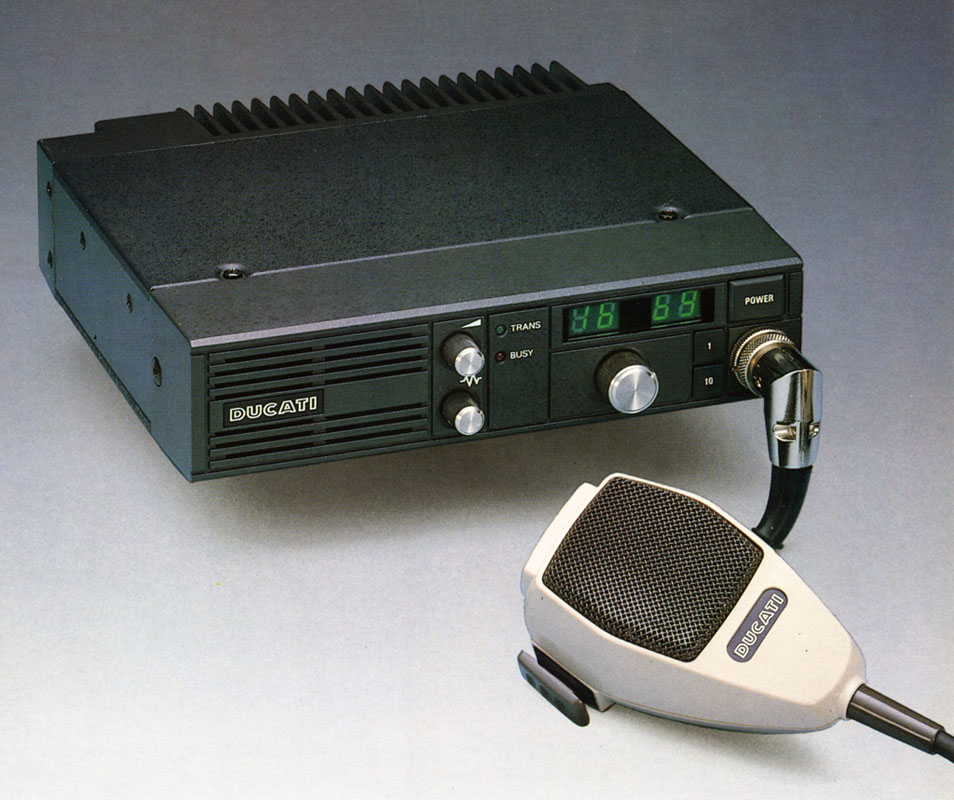 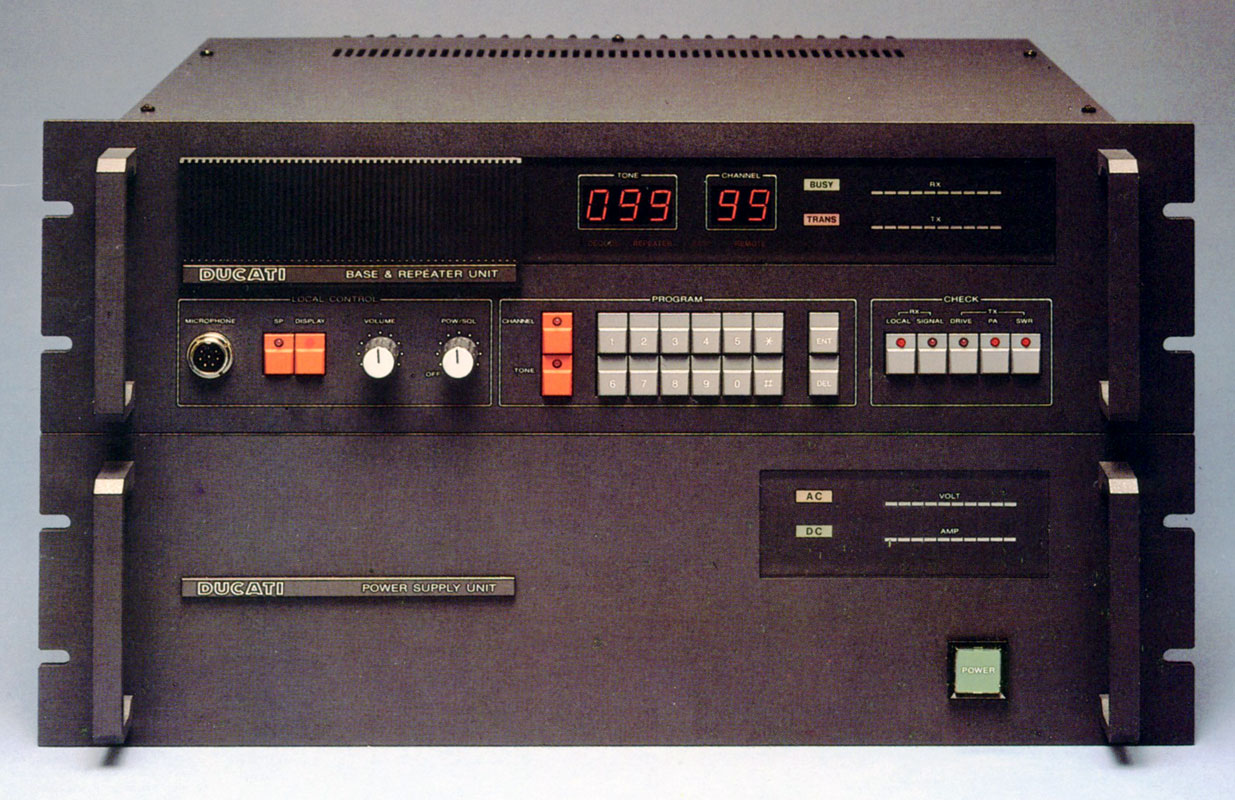 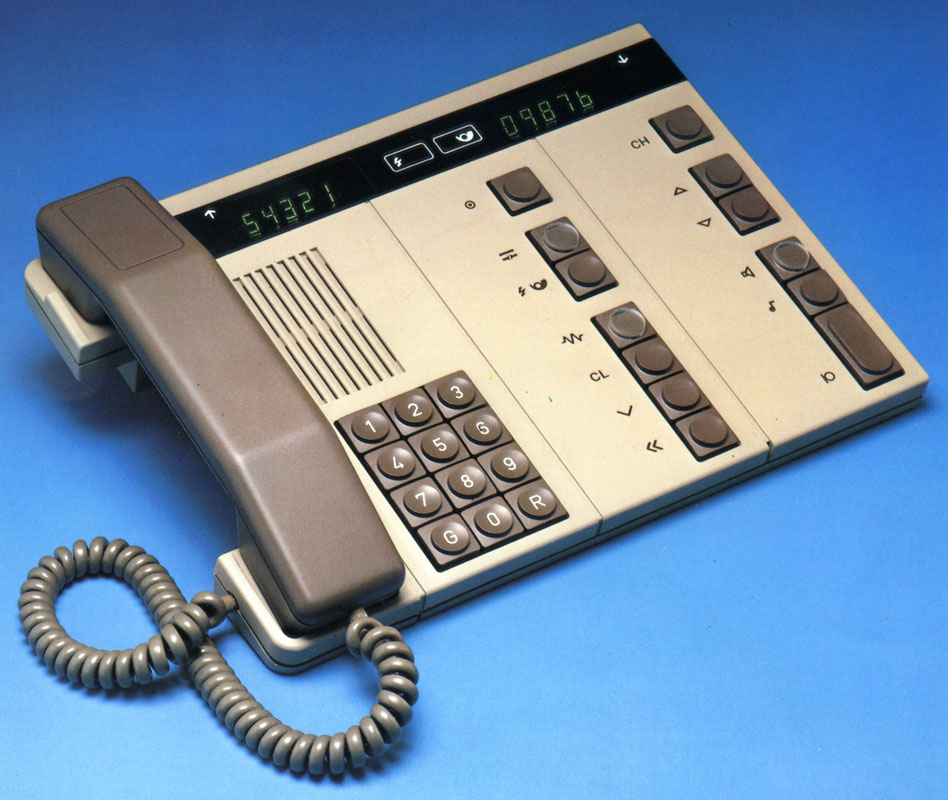 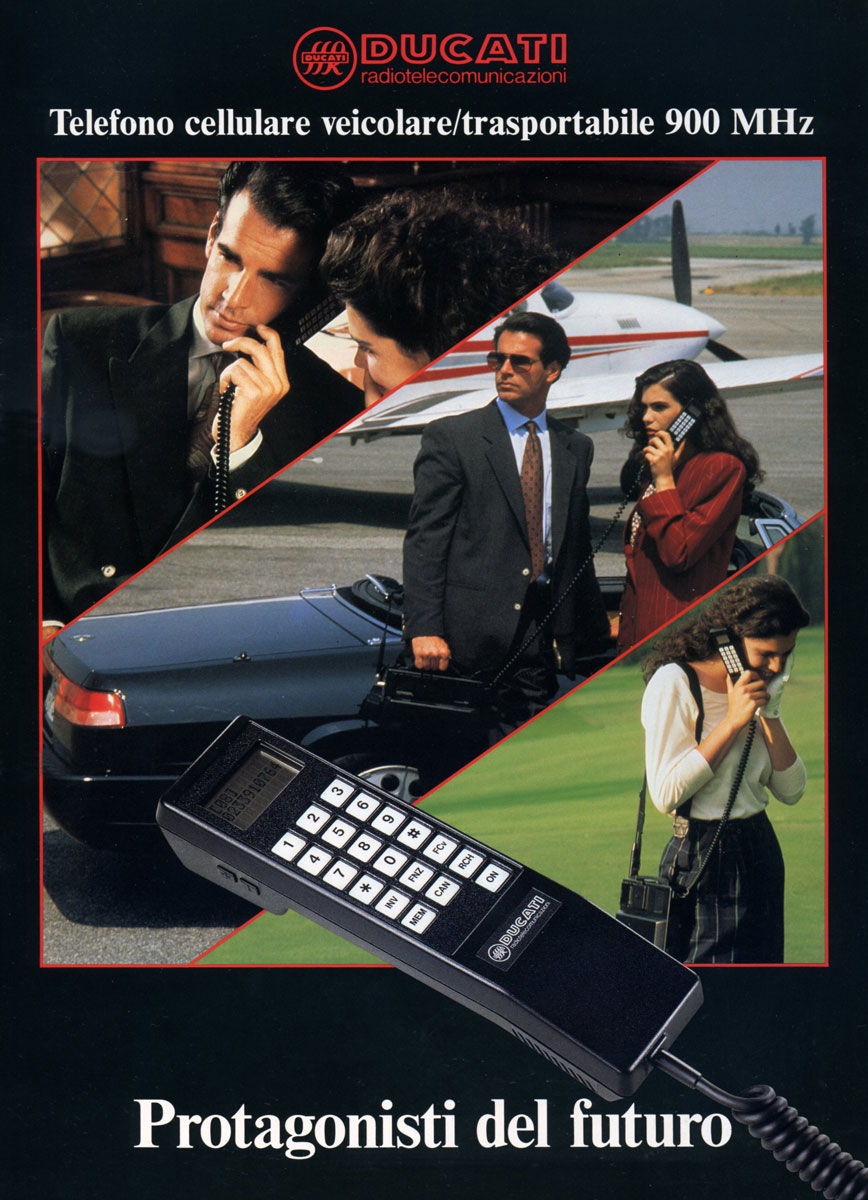 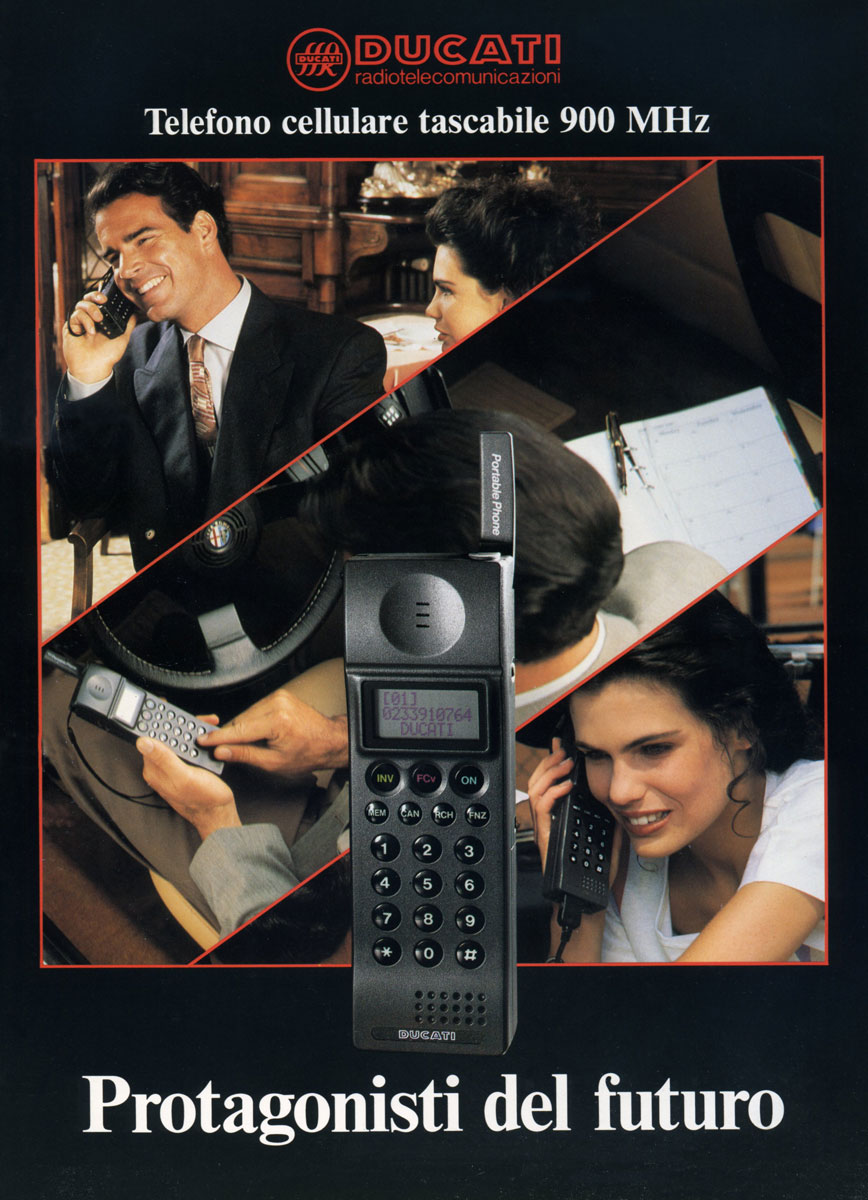 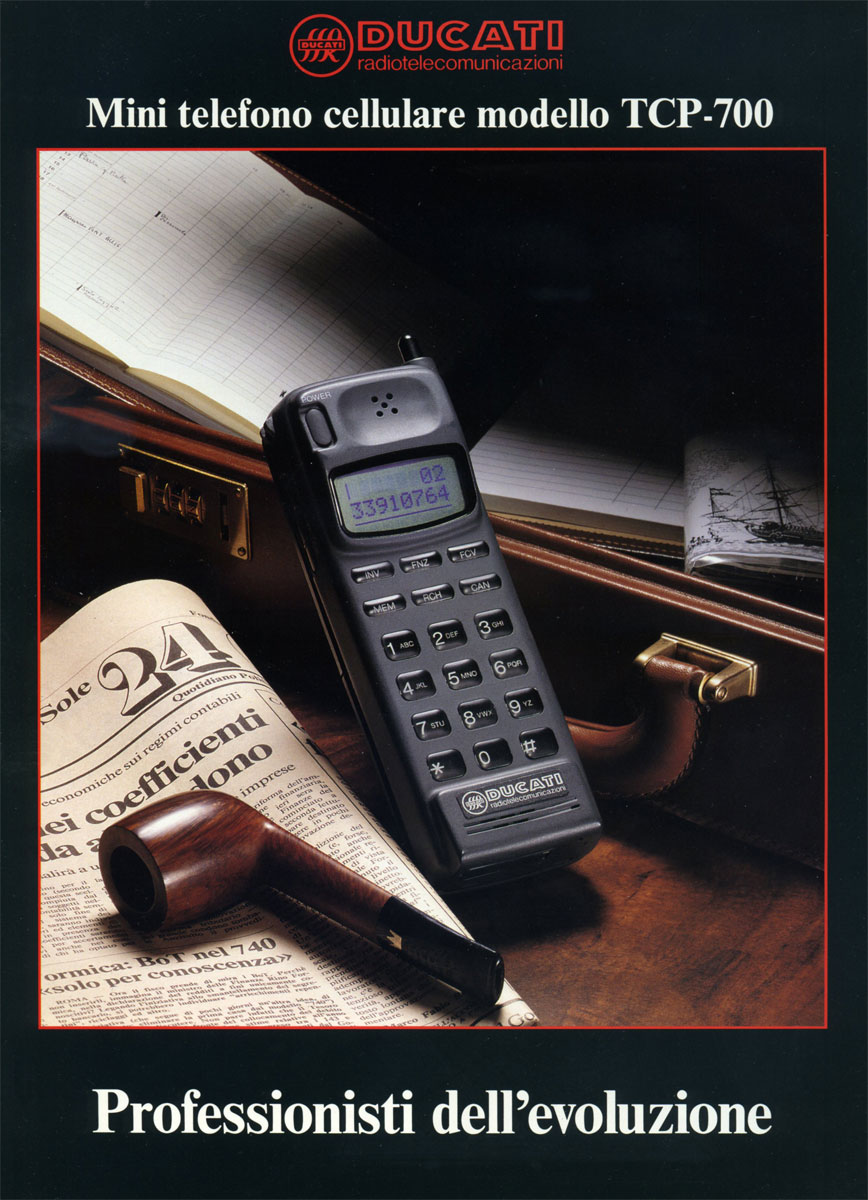 1993: Development and deployment of a safety and service communication system train-to-train and ground-to-train for Italian railways (Ferrovie dello Stato). 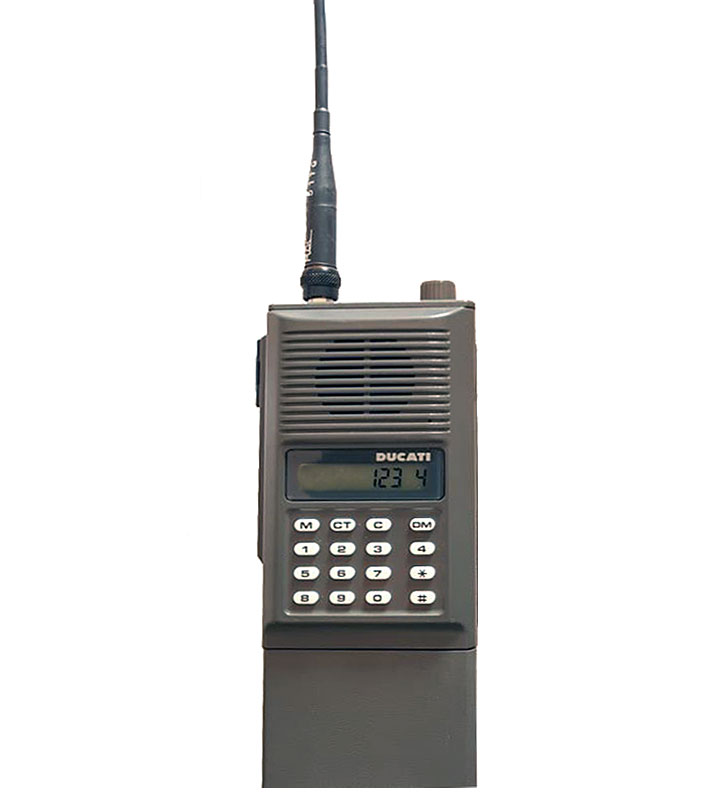 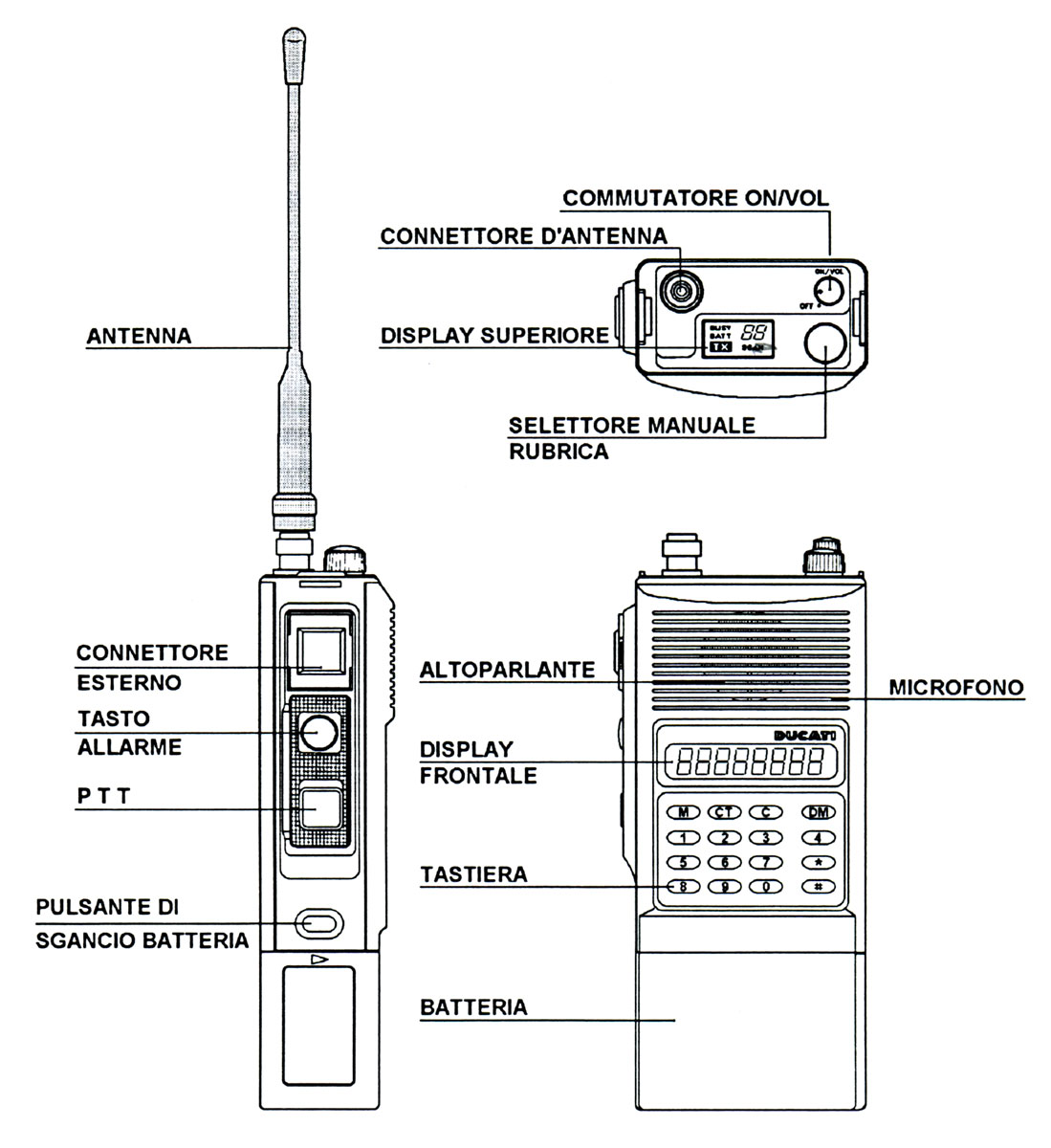 DUCATI Radiotelecomunicazioni, thanks to its long experience and expertise in the field of radio communications, aims at the operators of professional radio systems, both Italian and foreign, with DMR digital technology, introducing devices designed and built according to ETSI specifications, in collaboration with the most established world manufacturers. The skills and experience of its team allow to direct new product proposals to markets that require high levels of performance, quality, efficiency, reliability and continuity, which represent the keys to guarantee customer satisfaction.